USD/JPY is perking up in Asia but is treading thin ice along a fragile support structure around 130 the figure following a pop into key resistance on Tuesday near a 1-week high near 131.00, some way higher than 127.21 and its worst level since May recently scored.

The Bank of Japan policy review was a catalyst for the upside following the surprise hold on a policy that has enabled the pair to trend and test the daily trendline resistance as the following technical analysis below will illustrate.

Nevertheless, the US Dollar edged lower against the majority of the forex board, weakened after data showed the eurozone business activity made a surprise return to modest growth, sinking the DXY index as investors weigh the Federal Reserve vs. the European Central Bank.

With this regard, the Fed fund futures see only two more quarter-point rate hikes by the Fed to a peak of around 5% by June, before it starts cutting rates later in the year. However, many analysts are on the fence and some expect a more hawkish Fed given that it has insisted it still has 75 bps of increases in the pipeline.

For instance, analysts at Brown Brothers Harriman have also of the opinion that the market is underestimating the potential for a higher for longer Federal Reserve. ”Core Personal Consumption Expenditures, PCE, has largely been in a 4.5-5.5% range since November 2021,” they said. ”We think the Fed needs to see further improvement before even contemplating any sort of pivot.”

Analysts at ANZ Bank recently wrote a note, entitled, ”Fed tightening not done yet,” that ”so far in early 2023, US data releases have indicated a mild easing in inflationary pressures and softer demand. This indicates the Fed’s aggressive tightening last year is starting to take effect,” the analysts explained. ”Weakness in housing is evident (existing home sales fell 17.8% last year), manufacturing activity has faltered and Retail Sales are returning to trend.”

Big data week for US Dollar

Meanwhile, the week is about to get busier. US Core PCE prices likely accelerated to a 0.3% MoM pace in Dec, though a 0.4% gain can’t be discarded, analysts at TD Securities explained. ”The YoY rate likely slowed to 4.5%, suggesting prices continue to moderate but remain sticky at high levels. We also look for Gross Domestic Product growth to have stayed strong in Q4, posting another above-trend gain. Growth was likely supported by firm showings from the consumer and inventories.” 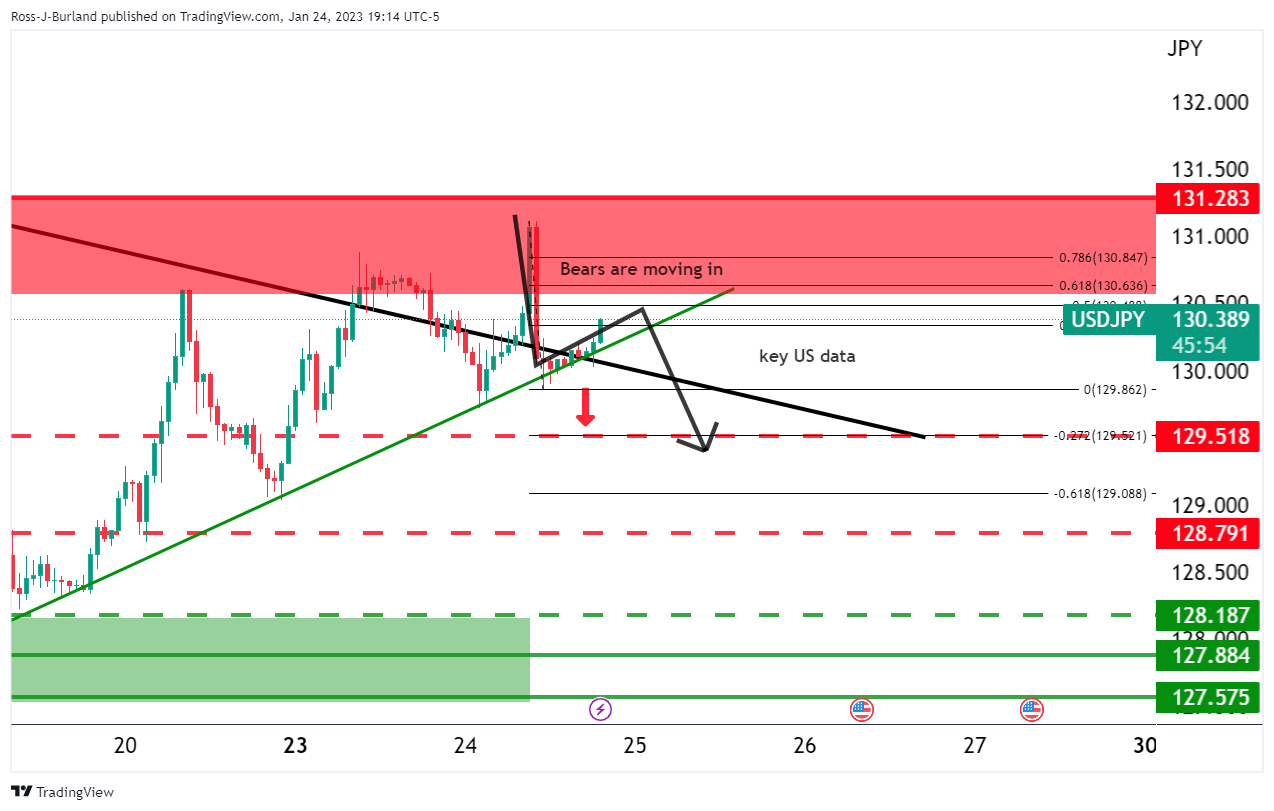 The bulls are trying to hold on but they may be pressured before long as the correction fizzles out and bears move in to test commitments at the trendline. 130.50 is key on the upside while it meets a 50% mean reversion of the prior bearish impulse. The 131.00 is an upside target that could otherwise give way to a full-on rally to fresh bull cycle highs beyond major dynamic daily resistance.

Canoo Sells Shares to Get Cash and the Stock Plunges