Collapse of the Carry Doesn’t Reach the S&P 500, Can EURUSD Fulfill Its Own Reversal?

Euro Hits New High as US Dollar Collapses in Fed Aftermath. Where to for EUR/USD?

When it comes to generating volatility, there are two factors that tend to stage abrupt and dramatic market moves. The first is the scale of importance of the event or news that is released – or at least the suitability of the event to the asset in question. Second, consideration is how surprising the outcome in question. As far as that latter factor for the Bank of Japan’s unexpected policy tightening announcement this past session, it was clear there was little to no preparation for such an outcome from the market. The central bank announced a widening of its target band on the 10-year Japanese Government Bond (JGB) yield from +/- 0.25 percent out to +/- 0.50 percent.

The market wasn’t wholly unprepared because the possibility of even such a modest tightening move seemed impossible, it was simply a deeply held assumption after a relentless trajectory of easing. There was also very little messaging offered as to such a possibility which is highly unusual in this day and age. This was no rate hike or conventional policy move as far as western central banks have pursued in 2022, but it is normalization of an unorthodox and extremely dovish policy stance. The response from the Yen was incredible. USDJPY posted its biggest single-day loss (-3.8 percent) since October of 1998. Interestingly, the ‘surge’ in the Japanese 10-year yield was handily offset by the US equivalents ‘modest’ uptick. Can this trend sustain beyond the shock value?

As far as the ‘scale of importance’ aspect of the BOJ rate decision, seeing the most committed of the major central banks ease back from its extreme stance signals that the global fight against inflation is even more pressing than some may have expected. In FX circles, the Japanese currency has been the ‘funding currency’ for carry trade for three decades. To see their capitulation (modest as it may be) is to see the lower end of the range edge up. This adds to more macro considerations in the markets such as the central banks’ near constant reiterations that they will fight inflation even at the expense of market tantrums and mild economic contractions. If we were dealing with full liquidity market conditions, that message may have permeated wider.

Yet, with volumes starting to fade, we wouldn’t see the fallout from the Japanese Nikkei 225 spread much further beyond other major Asian benchmarks like the Shanghai Composite or Hang Seng Index. The S&P 500 put in for its smallest daily range since before last week’s fundamental fireworks and does so above some fairly prominent technical support. The overlapping Fibonacci levels of the October to November leg (50%), August to October leg (38.2%) and March 2020 to December 2021 leg (38.2%) all fall around 3,800. The path of least resistance is to hold that backdrop and return to a range. But some forthcoming data may make a go of the boundaries. 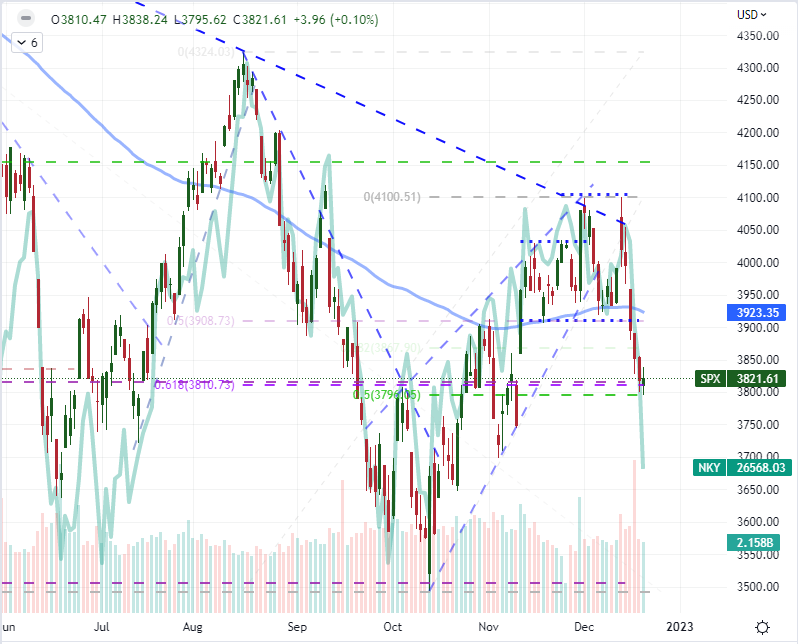 For the final 72 hours of this trading week – and arguably the twilight of the year – there is a breadth of event risk that can generate meaningful localized volatility, but few of these listings have the capacity to tap into the global market’s undercurrent. From a general market structure perspective, the upcoming session’s expiration of international money market assets (Eurodollar’s, FX futures, options, etc), there could be some repositioning that is amplified thanks to significant changes in monetary policy stances and the higher general pace of volatility in the FX market relative to other asset classes. More accessible for more traders though will be the event risk on tap. There is still an opportunity to tap the monetary policy volatility button with Friday’s PCE deflator, but that comes in the very last session before the Christmas weekend. Instead, it would seem that soft landing / recession speculation will be the more active node. Yet another ad hoc survey was released from Bloomberg this past session saying 70 percent of economists expect a US recession in 2023. More tangible insight will come from the economic docket ahead with the Conference Board’s consumer sentiment survey due for release. Overall, this survey has faired much better than the UofM reading, so any negative surprises here may exact more response.

Top Macro Economic Event Risk for the Next 72 Hours 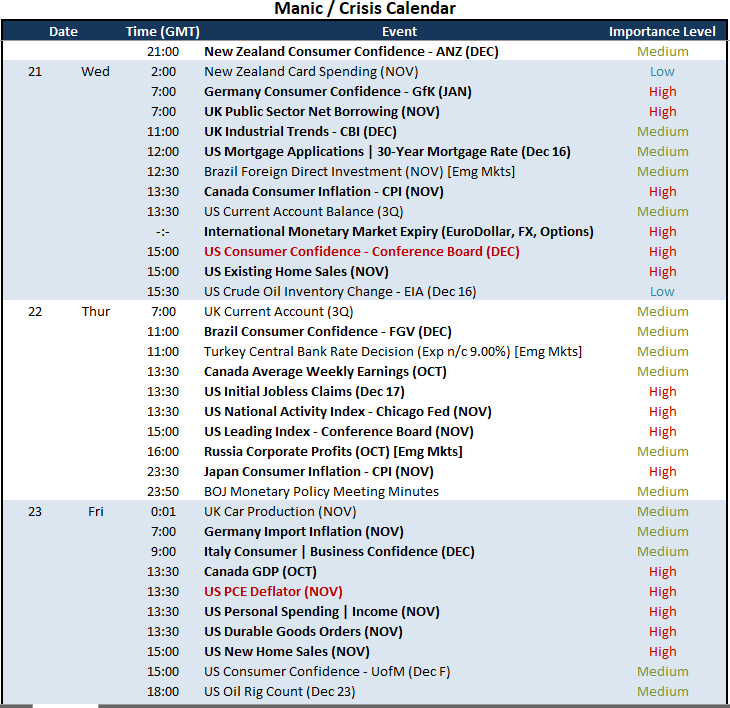 Looking for the capacity of movement given our backdrop conditions, appreciating the liquidity situation and the events that can provoke volatility is important. Yet, there is also the natural influence that comes revision to means. That is just the statistician’s way of saying ‘markets tend to normalize’. That can manifest in volatility moving to an average from extreme highs or lows. It can also see markets that have exhibited strong one-way movements to correct as positions are reduced. I continue to monitor the productive one-sided slide from the Greenback these past six weeks and the recent consolidation is growing more extreme. The 30-period historical range and ATR on the EURUSD (4 hour chart) below shows how remarkable the restrictions on activity. There is potential for a typical break from such a narrow band, but follow through will be heavily influenced by liquidity expectations. If there is any chance of follow through though, I would expect it to be more probably in the ‘path of least resistance’ which is for a move lower back into the past month’s range. The same is also true of pairs like GBPUSD and NZDUSD.

Chart of the EURUSD with 20-Day SMA, 30 Period ATR and Historical Range (4 Hour) 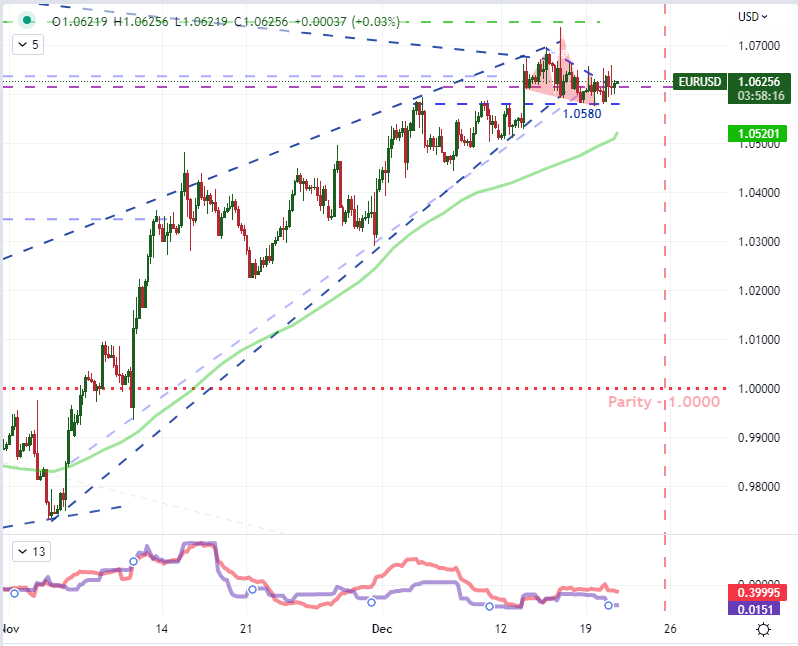 Discover what kind of forex trader you are

USD/CAD climbs in the North American session after hitting a daily low of 1.3311 before Wall Street opened. Nevertheless, a...

Euro Hits New High as US Dollar Collapses in Fed Aftermath. Where to for EUR/USD?

Fed Daly to speak on FOXBusiness at the 1430 ET

The San Francisco Fed President Mary Daly is expected to speak on FOXBusiness news at 1430 ET. Daly represents the...

The US Dollar strengthens across the FX space, a tailwind for the USD/CHF. USD/CHF Price Analysis: Shifted to neutral biased...

The Fed’s Dovish Nudge Sends the US Dollar Tumbling

US Dollar (DXY) Price and Chart AnalysisUS Treasury yields slump post-FOMC meeting.Friday’s NFPs are the next obstacle for the bulls...

How Much More Tax-Efficient Are ETFs Than Mutual Funds?