Canadian Blood Services says more donors are needed as Nova Scotians get ready to embark on their holiday plans.

Kathy Gracie, the Associate Director of Canadian Blood Services for Atlantic Canada, says the Bayers Road location has hundreds of open appointments for the period between Dec. 22 and Jan. 2.

“The holidays are a very trying time for us to fill appointment gaps,” Gracie says. “We have a lot of open appointments in that window, 340 to be exact in this location on Bayers Road, which is a lot of appointments for a little bit over a week.”

Gracie hopes Haligonians can include donating blood as part of their holiday festivities this year to help those in need.

She cites a busy flu season and the absence of pandemic restrictions as reasons why the need is especially high this year.

“Over my past two years with Canadian Blood Services, this is probably one of the worst I’ve seen in terms of us being prepared into that holiday window,” Gracie says.

“This is really the first Christmas without any pandemic restrictions. And then the other side of that is we’re in cold and flu season and we are seeing a lot of sicknesses, we’re seeing a lot of late cancellations and same day cancellations, which are really affecting our collections as well as we’re heading into the holidays.”

All donors are needed due to the many appointments that remain open. Those with an O-negative blood type, also known as a ‘universal donor,’ are always in high demand, according to Canadian Bood Services. 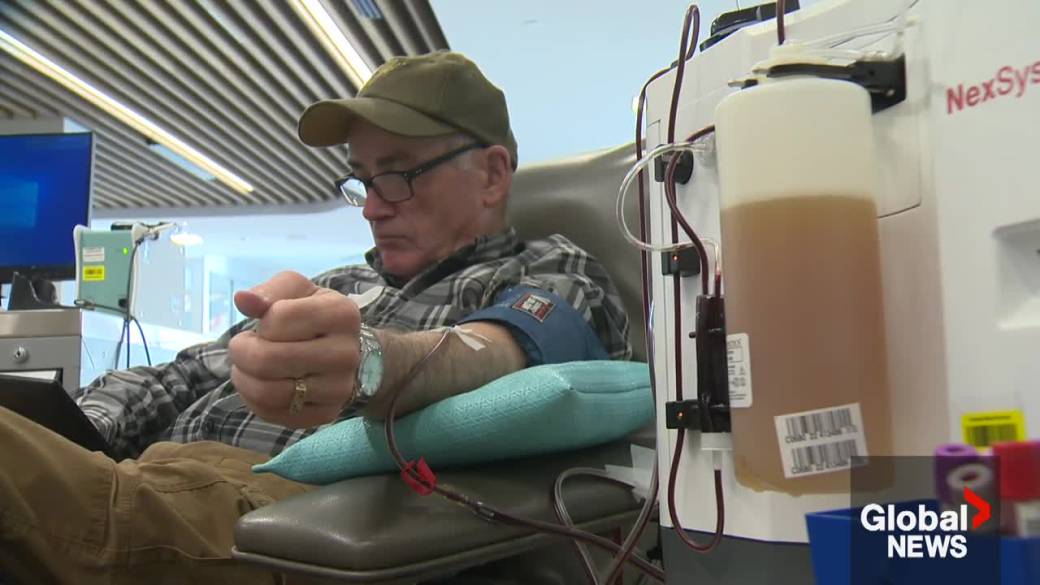 2:17Thousands of blood donation appointments need to be filled in next two weeks in Canada, hundreds in the Okanagan


Gracie says that when you give blood, you give the “gift of life.”

“When you leave our clinic, you leave holding your head high because you just saved a life,” she says. “One donation can save up to three lives. And you know, it’s something to be very proud of, especially in the time of giving.”

Michael Boucher has now donated blood 133 times. He started when he was a university student, and says he was inspired by his father who was also quick to roll up his sleeves to give.

“Well, for me, it’s just a way to give back, it was a family tradition,” he says. “My father did it before me and my daughter does it now.”

He says it also hits close to home because his mom is currently receiving care in the hospital.

“My mom’s actually in the hospital right now, she has stage four cancer,” Boucher says. “So for us, it’s just a way to help out.”

Overall, CBS estimates it has lost more than 31,000 regular donors nationwide since the beginning of the pandemic.

In June, it set the goal of reaching 100,000 new donors by the end of the year, but Gracie says it has been hard to see the replenishment of donors since COVID.

Gracie adds it’s an easy process and you’re usually in and out of the clinic on Bayers Road in about an hour.

“Just remember that the need for blood doesn’t get to take a holiday,” Gracie says. “The patients are really depending on it. This is their gift so that they can have another Christmas with us. So, please come out and donate.”

A new Ipsos survey shows while six out of 10 eligible donors in Canada believe donating blood or plasma over the holidays is important, only one in 10 plan to.

Canadian Blood Services directs donors to book an appointment at blood.ca, through the GiveBlood app, or by calling 1-800-236-6283.