Supporters of the separated bike lane through Vancouver’s Stanley Park are planning a rally Monday evening, with the city’s park board set to vote on removing it.

The lane was first implemented on Stanley Park Drive early in the COVID-19 pandemic. It has existed in its current form, which occupies one lane of the road formerly open to vehicle traffic, since spring 2021.

The lane has proven controversial, with some seniors and people with disabilities saying it has reduced their ability to access the park. Businesses in the park have also complained it is affecting their bottom line.

The ABC party, which now holds a majority on the Vancouver Park Board, signalled after the election that removing the lane for winter would be one of its first priorities, with plans to reinstall a modified version by next summer.

On Monday, the board will vote on an ABC motion to “immediately restore the pre-COVID traffic and parking configuration on Stanley Park Drive in time for the upcoming December 2022 peak Holiday Season.”

The motion would also direct staff to repurpose an ongoing mobility study on park usage as a “planning tool” to deliver new permanent cycling infrastructure in the park, with considerations for accessibility and tourist access by next February.

Lucy Maloney, a cycling advocate with the group Love the Lane, which is pressing the board to keep the separated lane, said she’s “disappointed” ABC has “doubled down” on its plan to remove the lane.

She said the need for a separated and safe route for cyclists is even more important in the winter with slippery roads and fewer hours of daylight. 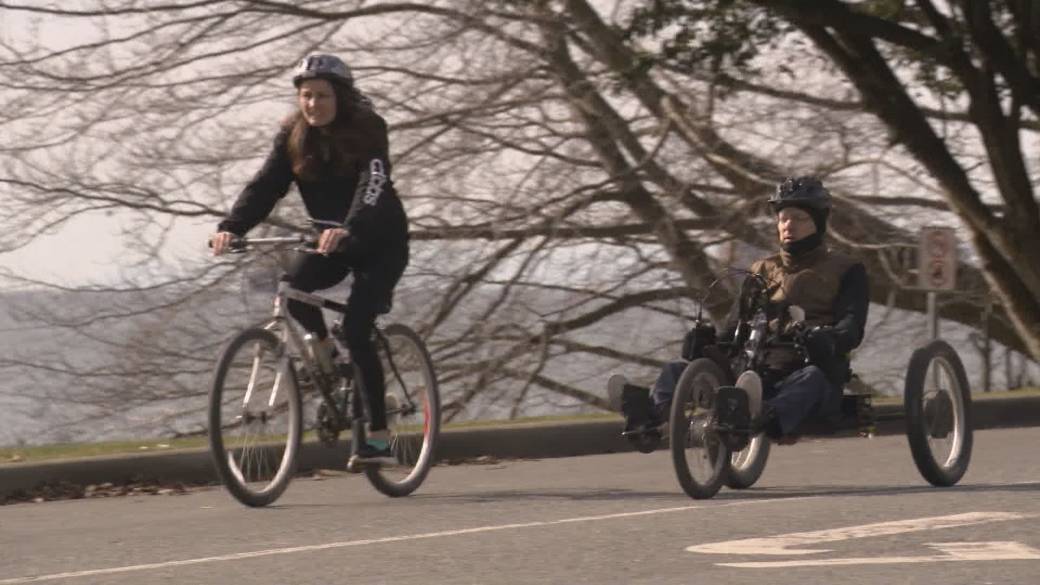 
Maloney acknowledged there are accessibility concerns around the lane, but added that it is also popular with numerous seniors and people with mobility issues.

“The park is inaccessible to a lot of people, but two lanes instead of one is not going to solve those complex accessibility issues — those things are better addressed by the Stanley Park Mobility Study where park board staff is actually talking to disabled people about what they need, not just politicians deciding what is accessible and what is not based on anecdotes from a few friends or people they have knocked doors and talked to,” she said.

“The sensible approach would be to leave the lane in place and over time incrementally spend money on improving the lane a piece at a time so that it doesn’t delay other important capital expenditures.”

Maloney described opposition to the lane as loud pushback from a “vocal minority,” and said surveys have pointed to the lane’s popularity. The board has received some 350 letters opposing the lane’s removal, she said.

“Those voices aren’t being heard,” she said.

Prior to the October vote, ABC commissioner candidates told HUB Cycling their plan for Stanley Park was to close the lane, develop a more equitable and desirable option for cyclists, and implement it in time for the summer of 2023.

“ABC has been listening to the people of Vancouver for the last six months, and overwhelmingly, voters want the temporary bike lane on Stanley Park Drive to be removed,” park commissioner Brennan Bastoyovanszky said, speaking with Global News last week.

“Most of what we hear from the public is that it causes traffic issues, not just within the park, but it impacts regionally, such as around Georgia and Denman (streets).”

Maloney and supporters with the Love the Lane group are planning to gather at the park board’s Stanley Park headquarters at 6:30 p.m. Monday.

Two unions representing thousands of tradesworkers across B.C. have lost the fight for their members to be paid overtime for...

French Economy Minister Bruno Le Maire will request "transparency" from Washington over its $369 billion green subsidy splurge in an...