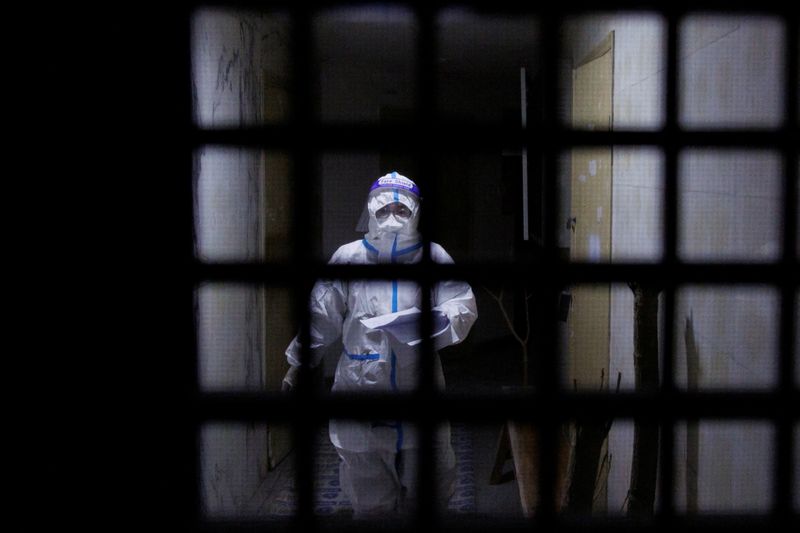 © Reuters. FILE PHOTO: A pandemic prevention worker in a protective suit approaches an apartment in a building that went into lockdown as coronavirus disease (COVID-19) outbreaks continue in Beijing, December 2, 2022. REUTERS/Thomas Peter/File Photo

“Omicron is not a threat, it is just like a normal cold,” said the IT worker in his mid-20s in Shanghai, describing China’s ongoing lockdown measures as “ridiculous”.

His frustration about civil rights and economic damage won’t sway Cai Shiyu, a 70-year-old resident of the megacity who has heart disease and high blood pressure.

“This isn’t like a cold that just goes away after a while,” said Cai, who feels one case of COVID-19 is too many to tolerate. “Otherwise the epidemic will definitely rebound.”

The fierce debate, which has ignited several anti-lockdown protests, illustrates the difficulties facing Xi and his government in relaxing the world’s most rigid COVID rules while heading off national discontent.

This unnerves people such as Cai, who say a low death toll testifies to the merits of the hardline approach.

Officially, there have been about 5,200 COVID deaths in China, versus more than 1 million in the United States, 690,000 in Brazil and 212,000 in Britain. A U.S.-scale death rate would have seen over 4 million die in the country of 1.4 billion people.

The potential risks of moving away from strict curbs, just as daily infections hit record levels, are heightened by comparatively low vaccination rates among the elderly and concerns about the resilience of the healthcare system.

Syler Sun, an advertising industry worker in Shanghai, reflected the conflict felt by many people about zero-COVID rules in the face of the Omicron variant, which tends to cause less severe illness.

China’s National Health Commission didn’t immediately respond to a request for comment about its plans for COVID containment.

Beijing says its policies have always “put people first” and have been designed to protect the most lives at the lowest cost. It has also said that recent policy adjustments are a refinement and not an abandonment of zero-COVID.

The measures are indeed tough.

A single COVID case can trigger the lockdown of a building or residential compound, and entire cities have been sealed off with only hours of notice.

Youth unemployment is at record highs and economic growth has plummeted this year, with factories hit and supply chains disrupted by lockdowns and other restrictions.

“If we continue to handle this virus with the same policies used at the start of the epidemic, it feels a little like using an anti-aircraft gun to kill mosquitoes,” Wang Weizheng, a Wuhan-based doctor, said on Chinese social media site Weibo (NASDAQ:).

Recent decisions to cut quarantine times and scale back testing requirements have been widely interpreted on social media and by analysts as the first tentative shift away from zero-COVID. Many have welcomed the changes, but others remain wary.

Laura Yasaitis, a public health expert at the Eurasia Group think-tank who follows China’s zero-COVID policies, said fear of the virus likely varied widely across the country, as well as within cities or provinces.

“Even these recent hesitant moves to loosen restrictions have led to reactions that hint at unease among the general public,” she said.

She pointed to an incident last month in Hebei province’s Shijiazhuang where authorities were forced to backtrack on a decision to shut down free COVID testing booths after local people complained of potential outbreak risks.

Many of the Foxconn workers who broke out of a “closed loop” factory in Zhengzhou last month said they did so because they were afraid of getting infected.

A study by Brown University researchers published in August, drawing on social media data and interviews with Shanghai residents, found that zero-COVID policies had received strong support in China, with compliance driven by “gruesome scenes” from countries where COVID measures were looser.

Indeed, higher death tolls in many other countries have bolstered public support for the government’s policies among some sections of the population.

“I used to live abroad and I feel as though China’s control has been much better than abroad,” said Wang Jian, a 32-year-old office manager in Shanghai. “There are different ways to handle the virus, China’s is just determined by China’s national conditions, and, looking at the numbers, I think it’s OK.”

‘FEARS WILL NOT GO AWAY’

The public discord about zero-COVID is accompanied by apparent differences among health professionals.

Zhang Wenhong, head of Shanghai’s expert COVID-19 team, said last month that the virus had become less virulent with Omicron and this, along with high overall vaccination levels, could finally give China a “way out” of the pandemic disruption.

Coronavirus expert Zhong Nanshan, who helped draw up China’s initial COVID-19 response, said Omicron’s mortality rate was relatively low “so citizens do not need to worry too much”.

Yet Zhou Jiatong, head of the Center for Disease Control in southwestern Guangxi region, struck a less optimistic tone about the variant in a paper published last month by the Shanghai Journal of Preventive Medicine.

He estimated that if mainland China had loosened COVID restrictions in the same way that Hong Kong did this year, it would have faced more than 233 million infections and more than 2 million deaths.

The experts didn’t respond to requests for further comment.

Katherine Mason, one of the researchers involved in the Brown University study, said Chinese authorities had work to do before they could move away from COVID curbs.

“Until they actually create the conditions – through much more widespread vaccination, capacity-building in hospitals, and a plan to slowly expose people in a step-wise fashion – in which the loss of life will not be too severe, people’s fears will rightly not go away,” Mason said.

Officials have repeatedly said that China’s health system would be unable to cope with a surge in cases, with medical resources unevenly distributed across the country.

Meanwhile vaccination rates among people aged 60 and above have remained little changed since the summer, according to official figures. Those who had received two doses inched up from 85.6% in August to 86.4% in November, while the booster shot rate rose from 67.8% to 68.2%, according to China’s CDC.

China said this week that it would launch a new vaccination drive among the over-60s.

The demographic profile of the weekend’s protesters suggests that younger city dwellers are increasingly willing to question the need to devote so much of the country’s resources to contain a virus they believe is no longer a major threat.

“I used to worry I might die from catching COVID, but now that so many of my friends have recovered from it, I think of it as just a flu,” a Beijing resident in his 20s surnamed Wang told Reuters on Saturday. Wang had joined neighbours in previous days to pressure local authorities to release them from lockdown.

One contributor to China’s Jinri Toutiao news and social media site said the only people who still believed in lockdowns were retirees and those who didn’t need to make a living.

“Before, the virus was as fierce as a tiger, but now it is a paper tiger,” the contributor wrote last week.

Not everyone believes protesting is the answer, though.

“There is no need to resort to these methods without using your brain. These actions will disturb the public order,” said Adam Yan, 26, who works in the food industry.

“The COVID situation is quite complicated, and people are coming up against new problems. I think it’s best to believe in the government and each do our best.”

The fintech startup hired Goldman Sachs and JPMorgan to advise it on a direct listing or a private-market transaction involving...

Intel Corp. shares dropped more than 9% in the extended session Thursday after the chip maker reported a big miss...

© Reuters. FILE PHOTO: Model Y cars are pictured during the opening ceremony of the new Tesla Gigafactory for electric...

Elliott Prepares to Nominate Slate of Directors at Salesforce

XRP Try To Break Consolidation At $0.4 To Conquer New Levels