Before Pope Francis‘s arrival in Canada last July, federal officials flagged concerns about the level of consultation done with a First Nations community that was set to host him.

Briefing notes prepared for the deputy minister of the Department of Crown-Indigenous Relations a month before the Pope arrived also show officials were concerned about how much help Catholic bishops would be in translating his Spanish into Indigenous languages.

The briefing notes were obtained by The Canadian Press through an access-to-information request.

Pope Francis, 85, journeyed to Canada in July to apologize for the Catholic Church’s role in residential schools.

Survivors had asked for such an apology for years leading up to the visit, including during trips to the Vatican by Indigenous leaders in 2009 and last April.

The Truth and Reconciliation Commission also listed an apology from the pope as one of its calls to action in its report that investigated the harm and legacy of residential schools. Indigenous children in Canada were forced to attend the government-funded, church-run institutions, where thousands suffered abuse, neglect and even died. 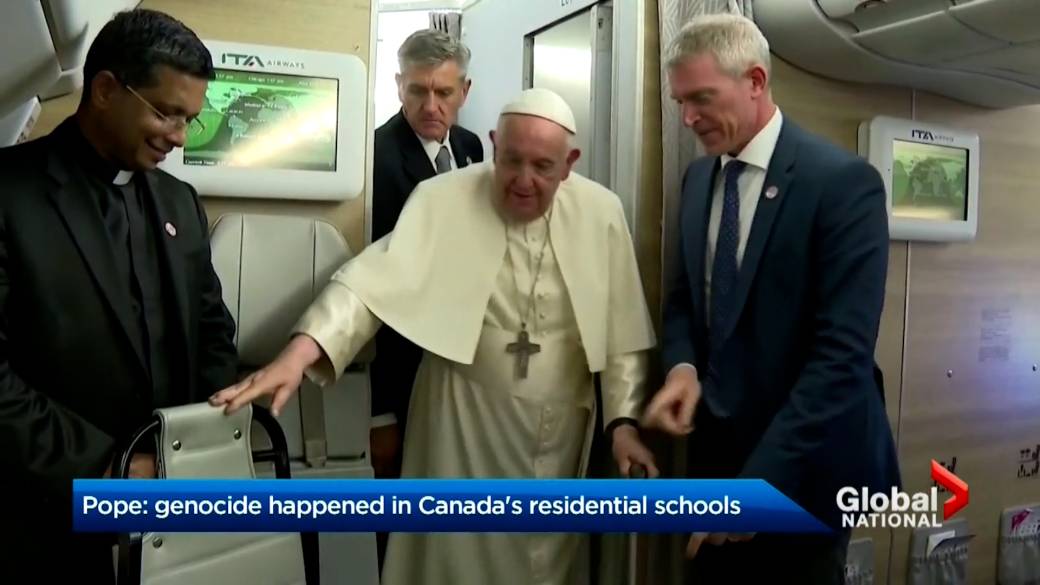 
When the apology finally came in July, it garnered a mix of reactions. Some survivors and elders said they felt it was significant step toward reconciliation, while others felt the Pope’s words fell short.

But the planning leading up to the visit raised some concerns.

A briefing document prepared ahead of an anticipated meeting in mid-June with the papal visit co-ordinator, Archbishop Richard Smith, shows federal officials expressed the need for improved communication after a recent planning visit to Alberta.

The province is home to Maskwacis, a group of four First Nations south of Edmonton, which was to be the site of the Pontiff’s apology.

“In terms of the most recent advance visit to Edmonton, it became apparent that there is a disconnect between the national, regional and local organizing committees,” according to the document.

“It was further emphasized that the communities of Maskwacis and Lac Ste. Anne needed to be more engaged when visits to their communities happen.

“In this regard, it was recommended that there will be further outreach to Maskwacis given the importance of this event in the overall papal visit.” 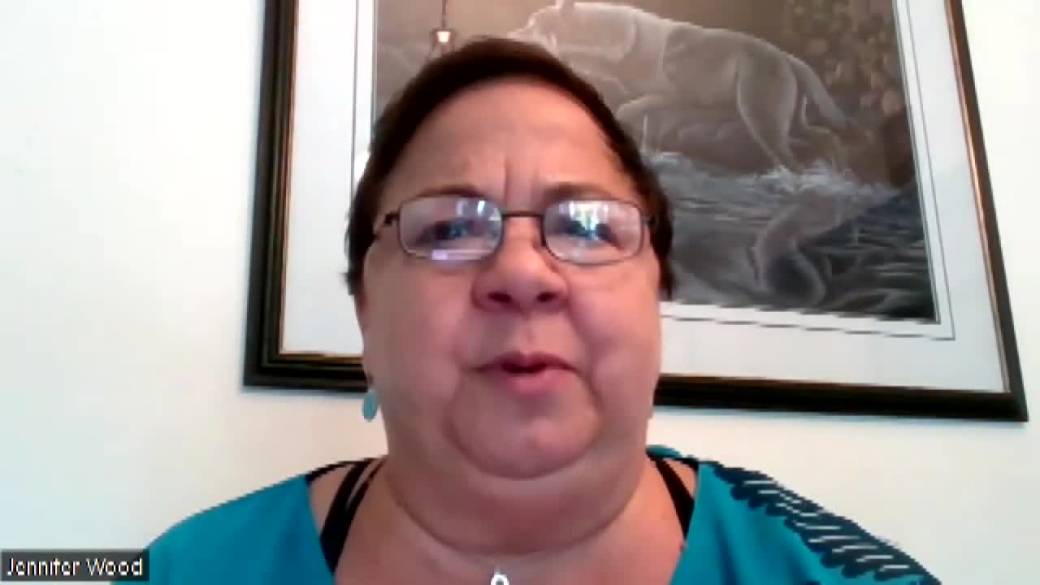 
In a statement to The Canadian Press, a spokesman for the papal visit said the archbishop and others involved in the planning worked with community leadership and were aware they were doing so under tight circumstances.

“The extremely short window of just a few months to plan the papal visit meant that things were moving very quickly, decisions had to be confirmed and the benefit of a traditional 18-month planning timeline was just not possible,” wrote Neil MacCarthy.

“The restrictions on the Holy Father’s health meant that events were limited in time and scope.”

Besides Indigenous leaders, local church and federal officials also had to work with directions from the Vatican, who decided that Francis’s visits to communities would last for just an hour or so, despite initial hopes they would be longer.

Following his apology, Pope Francis travelled northwest of Edmonton to Lac St. Anne, an important pilgrimage site to Indigenous Peoples and Catholics, and earned cheers when he greeted the crowd in Nakota, Cree and Blackfoot.

One consequence of residential schools was the destruction of Indigenous languages, because children were forbidden from speaking their mother tongue.

Before his visit, officials in Ottawa viewed translating Pope Francis’s words from Spanish into Indigenous languages as a must, and a task that required a lot of planning.

“A risk of not interpreting some of the Pope’s speeches into Indigenous languages is that a papal address translated into only English and French but for an audience of residential school survivors or Indigenous peoples could be seen as another act of colonization,” reads an internal document dated early June.

“Interpreting speeches into Indigenous languages could be seen as a meaningful act of decolonization.” 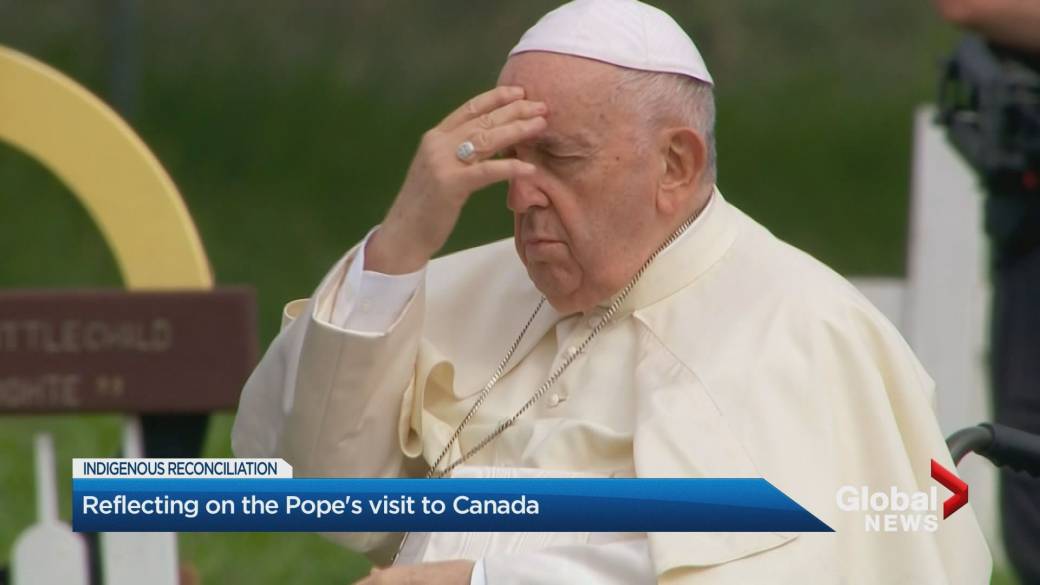 7:22Pope Francis wraps up Canadian reconciliation visit. What legacy did he leave behind?


It added that in doing so, Ottawa “would be able to follow through with its various commitments to promote Indigenous languages in particular the Indigenous Languages Act,” referring to legislation it passed in 2019.

The federal government ultimately spent $2 million to hire Indigenous language speakers to translate the Pope’s for broadcasts. The Canadian Conference of Catholic Bishops footed the bill for on-site services.

The Canadian Conference of Catholic Bishops, which organized the papal visit, says the trip cost it around $18.6 million.

What comes after Pope Francis’ apology? Here’s what advocates say

While the federal government has yet to release the final cost of the visit, including for security, some departments have published details on the price of some components.

In addition to the translation services, Crown-Indigenous Relations said it spent around $32 million on transportation costs for survivors who wanted to attend papal events in-person, or host related activities in their own communities.

Another $3.6 million, plus taxes, was paid to a production company to broadcast the five-day trip, the department said.

Global Affairs Canada, the government wing responsible for co-ordinating visits of world leaders, was preparing to spend around $2 million, according to a separate document released through federal access law, also obtained by The Canadian Press.