With polls suggesting her party could be relegated to third place in the Oct. 3 election, Quebec Liberal Leader Dominique Anglade is trying to turn around her team’s fortunes by putting more of herself forward.

Speaking to a lunchtime crowd at the Montreal Chamber of Commerce Tuesday, Anglade discarded prepared remarks in favour of a more conversational, personal tone as she paced the stage.

Anglade said later those close to her have told her they want to see more of the Dominique they know on the trail. And while she says she is comfortable with her party’s record, Anglade clearly wants to flip the script on her campaign.

“I am neither Philippe Couillard, nor Jean Charest, nor Robert Bourassa” she said in reference to previous Liberal leaders and premiers. “I am Dominique. That’s who I am.

“And there is no need to compare me with men who have gone before.”

Polls suggest the Liberals and the three other main opposition parties are in a logjam for second, with François Legault’s Coalition Avenir Québec well ahead in top spot.

The Liberals, who had 27 of the legislature’s 125 seats going into the election, have alternated between government and opposition throughout their history. But with the party in single-digit support among francophone voters and seeing their traditional anglophone base eaten away, even official Opposition is not longer a sure thing.

Valérie-Anne Maheo, a political science professor at Université Laval, said the COVID-19 pandemic didn’t help matters as opposition politicians were largely sidelined. Some parties have been better at crafting an image of their leader, whereas Anglade has heard a lot of questions about previous Liberal leaders about her time as president of the CAQ.

“For the opposition, it’s been hard for them to have a voice in terms of Quebec’s governance and for the leaders to be known, to be heard, for Quebecers to know their style, who they are, what are their ideas,” Maheo said.

Final debate could be last chance to coalesce opposition to CAQ

“So I think she’s trying to regain the narrative on who she is and what she represents and showing herself as a personable, relatable person is something that will help her on election day.”

But Maheo said the Quebec Liberals have struggled to find a platform that is distinct from the other parties, no longer having the threat of sovereignty and the economy to fall back on.

David Heurtel, a lawyer, political commentator and former Quebec Liberal cabinet minister, said that while other parties have a clear identity, the Liberals haven’t been able to rebrand.

Heurtel said the rise of Legault’s party, created in 2011, has robbed the Liberals of their claim to be the party of the economy, so it leaves the question: “Who are they?”

“Dominque Anglade, the leader has been unable to answer that question, and on top of that, she’s been responsible for a lot of self-inflicted wounds during this campaign,” Heurtel said.

“She’s very good on policy. She’s had a lot of trouble connecting on the ground with voters, francophone and anglophone, on what I call kitchen table issues.”

Anglade has been dogged by a sluggish campaign start which saw the party struggling to find candidates for all 125 ridings, including typically safe Liberal seats. Ahead of the first leaders debate last week, the Liberal team was forced to admit the debt figures in its costed platform were off by $16 billion. 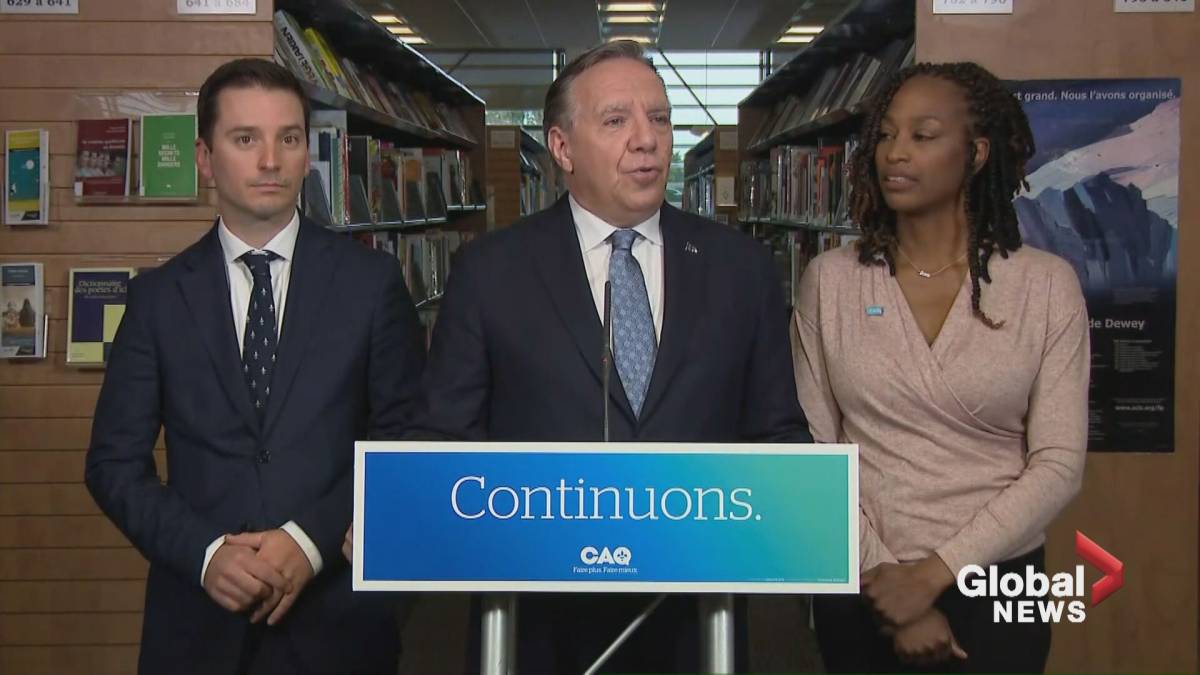 2:08Has Quebec’s election campaign turned into a two-party race?

Some good news came late Wednesday when a Liberal candidate in Matane-Matapédia who was rejected by a local election officials saw Quebec Superior Court overturn that decision, meaning the party will field a full slate across the province.

Going into the campaign, the party was dealing with anger from the anglophone community over how it handled the adoption of Bill 96, a the CAQ government’s language-law reform.

Anglade said this week she is still confident she can win and will stay on as Liberal leader, although her own Montreal riding of St-Henri-Ste-Anne is considered a tough, three-way race.

“We’re talking about a major political party, one that’s been part of the bipartisan system for so long in Quebec,” Maheo said, saying it doesn’t bode well they could end up with as many votes as Québec solidaire, which has been a third-place party and is nipping at its heels.

Former Liberal cabinet minister Luc Fortin, who was in the audience for the luncheon, said renewal is essential to the party’s future.

Fortin says it’s clear that austerity measures brought in between 2014 and 2018 by the previous Liberal government displeased voters. “I was a member of that government and we received, let’s say, a very clear verdict from the people of Quebec in 2018, so, I think that things could not have continued in the direction in which they were going,” Fortin said.

He said he’s not worried about the Liberal party’s ability to mount a comeback, and he believes Anglade’s progressive platform is the right approach, but she hasn’t had enough time to become known since becoming leader in 2020.

So as all other party leaders hunkered down Wednesday preparing for the final debate Thursday night, Anglade was out campaigning, making an announcement and granting a few media interviews.

“For sure I’m going to go full steam until Oct. 3, there’s no question about that,” she said in the Montreal suburb of St-Lambert.

Liz Truss has a matter of days to row back on controversial tax and welfare cuts or face a parliamentary...

At first Coreen Shatz thought it was funny when she called Service Canada to apply for EI benefits only to...

Brad Vis has learned a lot about how to help after watching fire, flooding and landslides destroy parts of the communities...

Joseph Webster is a senior fellow at the Atlantic Council’s Global Energy Center and edits the China-Russia Report, an independent...

Truss tells Tory rebels ‘there is no option but to change’

Liz Truss has warned Tory rebels urging her to abandon her controversial tax cutting agenda that she will not change...

5G Stocks To Buy And Watch As 2022 Smartphone Forecasts Lowered

5G Stocks To Buy And Watch As 2022 Smartphone Forecasts Lowered

How Far Will AbbVie’s Humira Revenue Fall in 2023?