Canadian CPI measures noticeably cooled in August, offering some respite for a Bank of Canada that has been extremely aggressive in its efforts to tame price increases. Core measures came in lower than expectations on both a MoM and YoY basis, while headline CPI also came in below consensus (7% vs. 7.3% est.). The lower readings were helped by declines in the prices of gasoline, durable goods, and shelter. Despite the green shoots, food prices continue to surge. The cost of food rose by 10.8% in August, the largest increase since 1981.

This morning’s print is the second month that inflation readings have eased, potentially showing that the Bank of Canada’s “front-loading” of interest rate hikes is slowly having an impact on the economy. The Bank of Canada boasts the highest policy rate among advanced economies, following another 0.75% rate hike at their most recent meeting.

Courtesy of the DailyFX Economic Calendar

Bank of Canada policymakers have remained steadfast in their commitment to raising interest rates, as the central bank continues to move to ensure that inflation does not become entrenched. The BoC’s aggressive stance has seen a weakening of the labor market, as unemployment jumped to 5.4% in August. Despite this recent weakness, traders continue to price another 50 basis point rate hike from the BoC at next month’s meeting. Markets currently expect an additional 25 bps hike in December, with the BoC pausing thereafter. 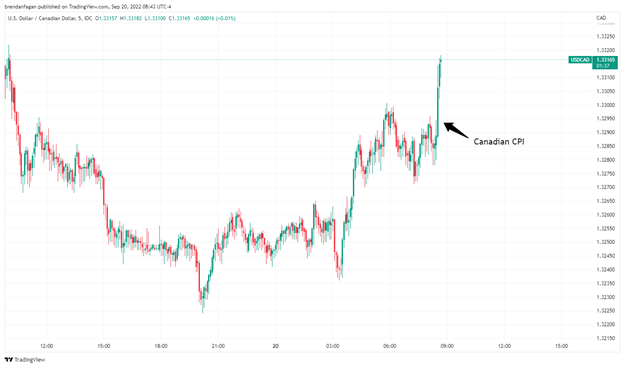 Following the release of the data, USDCAD spiked higher above 1.3300, breaking through resistance to mint fresh session highs. The cross had been pushing higher throughout the European session as the Greenback gained a renewed bid ahead of tomorrow’s FOMC interest rate decision. While inflation remains high in Canada, a cooling of CPI may fuel bets that the Bank of Canada may begin to slow down its aggressive pace of tightening. Weaker oil prices have also weighed heavily on the commodity linked Loonie, which has allowed USDCAD to stretch to fresh YTD highs.

Easy come, easy go. The BOE announcement brought some relief to broader market sentiment but it is proving temporary as...

S&P 500 is testing the critical support with extreme oversold condition. Find out how to anticipate if there will be...