As we barrel toward the September FOMC meeting, market participants continue to debate the substance of the Fed’s next move. While market pricing shows traders are positioned for a 75 basis point rate hike, next week’s CPI print during the Fed blackout window has the potential to change the lay of the land. In remarks just this morning, Fed Chair Powell remained hawkish and gave no pushback on the prospect of a 0.75% rate hike in two weeks.

Chair Powell has changed tone since the July policy meeting, where he made a case for eventually slowing the pace of tightening, which opened the door for the market to price the “Fed pivot.” This sentiment shifted drastically at Jackson Hole, where Powell came out aggressive on inflation, indicating that the Fed cannot repeat “mistakes of the past.” While the data recently has suggested the potential for just 50 bps later this month, Federal Reserve officials have continued to talk up the prospect of the need for continued tightening of financial conditions.

The consensus view remains that additional rate hikes are needed to stem the tide of inflation. Loretta Mester’s recent comments about maintaining an elevated fed funds rate highlight the nature of the task at hand, indicating that rates could stay high if inflationary pressures remain sticky. The general view of policymakers is that rates should be roughly 4% into year-end, rising slightly above that mark early next year. How far the Committee will need to go into restrictive territory remains to be seen, and upcoming inflation prints may go a long way to offering some form of clarity. Next week sees CPI data for August cross the wires, which may build on the soft CPI and PCE prints for July. 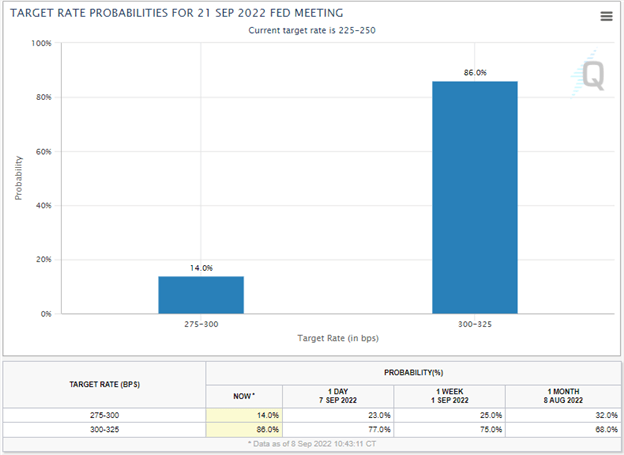 Courtesy of the CME FedWatch Tool

Current market pricing indicates that the Fed is expected to continue with “oversized” rate hikes and deliver another 75 basis point hike. Little has changed over the last month, with the probability of 75 bps rising from 68% to 96% according to the CME FedWatch Tool. All may hinge on next week’s inflation print, as it represents the last major data point ahead of the September 21st decision.

While 75 appears to be baked in the cake, the possibility remains that another soft CPI print next week may cause traders to think twice. The discussion may change drastically if the Fed gets another data point that shows consumer prices are falling. If that is the case, the Fed may think twice about plowing ahead with their aggressive tightening cycle. It is my opinion that this tail risk cannot be counted out, even if the current probability is just 14%.

While I currently fall into the “75” camp, I am open to the prospect of a 50 basis point hike. Like the Federal Reserve officials, I too will remain data dependent in how I view upcoming meetings. If consumer prices show additional signs of cooling, whether that is through pure demand destruction or an easing of supply constraints, I will listen more to the “50” crowd. However, this is not my base case. WTI trading down to nearly $80/bbl does catch my attention, and I will be looking to see if this breakdown in oil markets gains any additional steam.

The Italian economy grew by 5.0% in the second quarter compared with the same period of 2021, national statistics bureau...

PM Truss in Focus Ahead of UK and U.S. Services PMI’s

POUND STERLING TALKING POINTSCan PM Liz Truss return order to the Conservative Party?Non-manufacturing PMI’s under scrutiny for both UK and...

© Reuters. FILE PHOTO: China's official app for digital yuan is seen on a mobile phone next to 100-yuan banknotes...