EUR/USD pulls back from a fresh weekly high (1.0030) amid the kneejerk reaction to the European Central Bank (ECB) interest rate decision, but the exchange rate appears to be reversing ahead of the December 2002 low (0.9859) as it preserves the series of higher highs and lows from earlier this week.

EUR/USD struggles to test the monthly high (1.0054) even as the ECB steps up its effort to combat inflation, and the exchange rate may continue to track the negative slope in the 50-Day SMA (1.0126) as the Governing Council shows little interest in implementing a restrictive policy.

It seems as though the ECB will implement smaller rate hikes over the remainder of the year as the Governing Council insists that the actions taken at the September meeting “frontloads the transition from the prevailing highly accommodative level of policy rates towards levels that will ensure the timely return of inflation to our two per cent medium-term target.”

As a result, the Governing Council may gradually change its tone over the coming months as “recent data point to a substantial slowdown in euro area economic growth,” and President Christine Lagarde and Co. may come under pressure to support the monetary union as the “slowing economy is likely to lead to some increase in the unemployment rate.”

In turn, EUR/USD may face headwinds going into the Federal Reserve interest rate decision on September 21 as Chairman Jerome Powell and Co. prepare US households and businesses for a restrictive policy, while the tilt in retail sentiment looks poised to persist as traders have been net-long the pair for most of the year.

The IG Client Sentiment report shows 64.81% of traders are currently net-long EUR/USD, with the ratio of traders long to short standing at 1.84 to 1.

The number of traders net-long is 11.60% lower than yesterday and 8.13% lower from last week, while the number of traders net-short is 12.59% higher than yesterday and 9.10% higher from last week. The decline in net-long interest has done little to alleviate the crowding behavior as 63.01% of traders were net-long EUR/USD last week, while the rise in net-short position comes as the exchange rate pulls back ahead of the monthly high (1.0054).

With that said, EUR/USD may continue to track the negative slope in the 50-Day SMA (1.0126) as the ECB shows little interest in implementing a restrictive policy, but the failed attempt to test the December 2002 low (0.9859) may foster a near-term rebound in the exchange rate as it preserves the series of higher highs and lows from earlier this week. 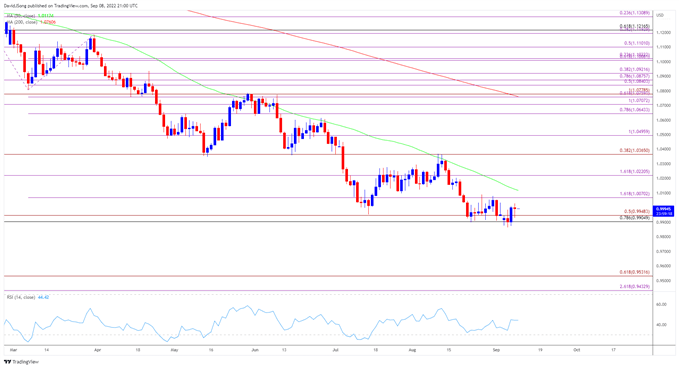 2/2 © Reuters. FILE PHOTO: A worker pushing a trolley walks with pedestrians past the Reserve Bank of Australia (RBA)...

It's a new week after a weekend chalk-full of rumors:Credit Suisse or another major bank going downAn emergency Fed meetingA...

Silver prolongs its upward trajectory and climbs to over a one-week high on Monday. Bulls still seem to struggle to...

How to Control Greed When Trading

© Reuters. FILE PHOTO: Japan's Finance Minister Shunichi Suzuki stands up from a table as he finishes his news conference...

A Powerful Actor Slaps Kim Kardashian in a Crypto Scam