Dollar hits one-week high on caution ahead of central bank meetings By Investing.com

The price of gold struggles to hold above the 50-Day SMA ($1780) as it gives back the advance from last week, and the precious metal may continue to track the negative slope in the moving average if it fails to defend the monthly low ($1754).

The price of gold appears to be reversing ahead of the monthly high ($1808) even as US Treasury yields remain under pressure, and the precious metal may threaten the opening range for August as it snaps the series of higher highs and lows from last week.

It remains to be seen if the Federal Open Market Committee (FOMC) Minutes will influence the price of gold as the slowdown in the US Consumer Price Index (CPI) dampens bets for another 75bp rate hike, but hints of a looming shift in the Fed’s approach for combating inflation may prop up the precious metal as the central bank appears to be on track to winddown its hiking-cycle over the coming months.

As a result, the statement may foreshadow a shift in the Fed’s forward guidance if a growing number of officials show a greater willingness to implement smaller rate hikes, and the price of gold may stage a larger recovery ahead of the next interest rate decision on September 21 as it trades above the 50-Day SMA ($1780) for the first time since April.

However, more of the same from the FOMC may drag on the price of gold as Chairman Jerome Powell acknowledges that “another unusually large increase could be appropriate at our next meeting,” and the rebound from the yearly low ($1681) may turn out to be a near-term correction as the moving average continues to reflect a negative slope.

With that said, the price of gold may continue to track the negative slope in the moving average with the FOMC on track to carry out a restrictive policy, and the weakness in the precious metal may persist if it fails to defend the opening range for August. 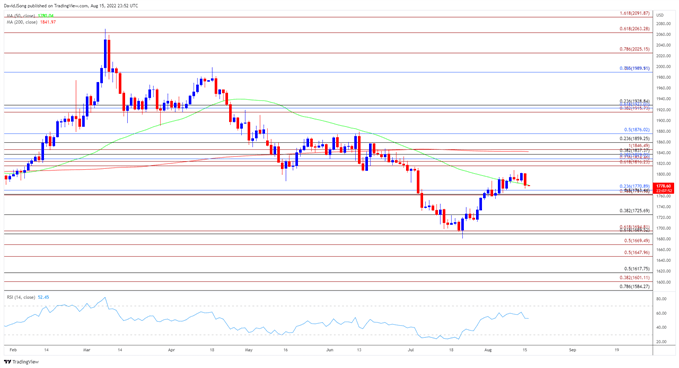 Dollar hits one-week high on caution ahead of central bank meetings By Investing.com

© Reuters By Geoffrey Smith Investing.com -- The dollar hit its highest level in a week in early trading in...

Euro Steadies Ahead of Crucial Fed and ECB Meetings This Week. Higher EUR/USD?

What Is the Internal Revenue Code? Definition & History

SEC settles on security claim in LBRY case, community calls it a big win for crypto