Stocks pushed higher during Monday’s session as US traders remained bullish following last week’s march higher. The Dow was able to erase an early drop of roughly 180 points as economic data from China weighed on sentiment during the overnight session. Despite heightened fears about a global growth slowdown, traders may be focusing more on the potential for peak inflation in the US following last week’s CPI print. This week sees major retailers such as Home Depot and Walmart report earnings, and market participants will be following along closely for clues as to the health of the US consumer. As earnings remain relatively strong and sentiment continues to improve, this recent rally may have more room to run in the near-term.

Last week’s rally of 2.9% for the Dow Jones sees the index sit roughly 14.5% off the June lows, with Monday’s gains taking the value index closer to bull market territory. This “summer rally” has taken the Dow back through the 50% Fib retracement of the YTD decline, with the .618 Fib level coming into focus just above 34,000. For much of Q4 2021 and Q1 2022, the 34,000 level often acted as key support for the index, with dips into this zone constantly being bought. For the first time since April, the Dow now trades back above its 200-day moving average.

The heavyweight value index now enters a crucial period, with major constituents poised to release earnings over the next few weeks. On the cards this week we have Walmart, which was crushed following its previous report for weak guidance. If Walmart can beat estimates and indicate that the consumer remains strong, the Dow may stand to benefit as the prospect of a “soft landing” may grow. Home Depot is slated to release quarterly results on Tuesday, where analysts expect EPS of $4.93 and revenues of $43.3 billion. Energy stocks weighed on the Dow Monday as oil continued to sink lower. Chevron fell 1.5% as WTI traded back below $90/bbl. 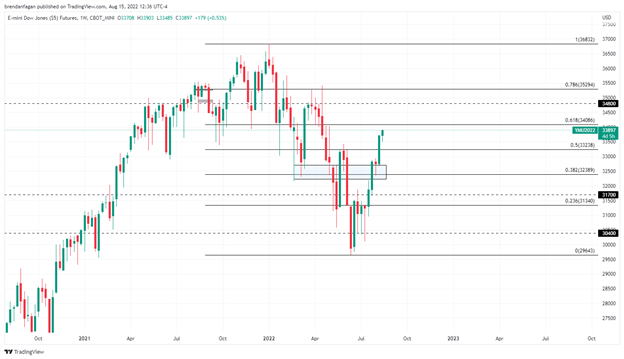 Despite the recent bounce in equities, the outlook generally remains mixed. While CPI and PPI came in soft last week, the Federal Reserve will likely need additional data points ahead of the September meeting to determine if a policy pivot is truly appropriate. US Treasury yields came in on Monday which buoyed stocks, but inflows into bonds may signal that “smart money” sees trouble ahead.

As growth expectations continue to get lowered, the potential for recession remains top of mind for many. And while the US consumer remains strong, there could be spillover effects should a global recession materialize. With the Dow and its components being sensitive to the changing tides of the global economy, traders may want to remain data dependent when trading the blue chip index.

Fed to hike 25bps; the bar is high to flip the status quo for USD – TD