Signs of Exhaustion Appear Around the 1800 Level

Recent price action for gold has shown multiple failures to trade above the 1800 mark despite numerous tests, which underscores the near-term importance of the psychological whole number of 1800.

The MACD indicator is also showing waning momentum, marking lower highs and lower lows as it approaches the zero mark. Currently, it appears as if gold is attempting another test of 1800 where another failure could add to the idea that gold prices could ease off from here.

Mixed fundamental factors complicate the outlook for gold as the unresolved US-China-Taiwan disputes drag on and could intensify after Nancy Pelosi’s visit to Taiwan. Escalations tend to support gold valuations which could see the precious metal breach the 1800 mark even if it is only temporarily.

Furthermore, it remains unlikely that the Fed will ease up on the rate hiking front despite a cooler July CPI print. Jerome Powell and other prominent FOMC members have alluded to requiring “compelling evidence” that inflation is cooling before pivoting away from aggressive rate hikes. 50 basis points in September appears to be the base case with an outside chance we could still see 75 basis points. All eyes will be on the PCE print on August 26th as this measure of inflation has more influence over the FOMC than CPI. 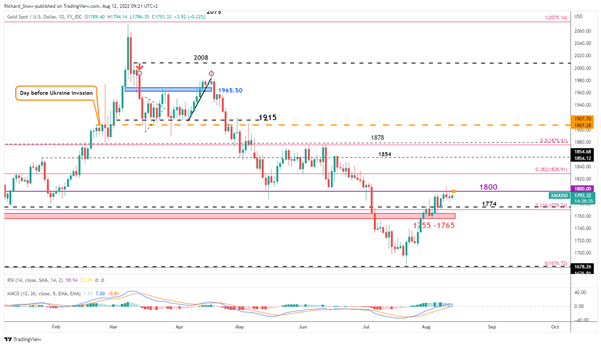 The subject of inflation is so yesterday on the FX market. Thus, US Dollar bears are set to remain at...

Bitcoin (BTC/USD) Technical Analysis:Bitcoin prices slide from technical resistance driving prices back below $17000BTC/USD trades in a narrow range as...

© Reuters. FILE PHOTO: An employee is seen walking over a mosaic of pound sterling symbols set in the floor...

When Is It Time to Retire? Readers (and I) Want to Know