On-chain data shows the part of the Bitcoin realized cap held by the long-term holders has increased and is now at nearly 80%.

As explained by an analyst in a CryptoQuant post, the crypto has historically tended to form bottoms around when the long-term holder share of realized cap has exceeded 80%.

The “long-term holders” (LTHs) are all those Bitcoin investors who have been holding onto their coins without selling or moving since at least 155 days ago.

The realized cap is a way of assessing the capitalization of the crypto where each circulating coin’s value is taken as the price it was last moved or sold at, rather than the current BTC price.

Now, the relevant on-chain indicator here is the “realized cap – UTXO age bands (%),” which tells us what part are the various groups in the Bitcoin market contributing to the total realized cap of the coin.

Related Reading | Bitcoin Exchange Reserve Spikes Up, Selloff Not Over Yet?

The various age bands denote the amount of time investors belonging to a group have been holding their coins for.

As mentioned earlier, LTHs include all cohorts holding since at least 155 days ago. Here is a chart that shows how the contribution to the realized cap by these investors have changed over the history of Bitcoin:

In the above graph, the quant has marked all the relevant points of trend related to the Bitcoin realized cap percentage of the LTHs.

It seems like whenever the indicator’s value has crossed the 80% mark, a bottom in the price of the crypto has taken place.

Currently, the metric’s value has been rising up in recent weeks, however, it has still not gone above the threshold just yet.

Nonetheless, the indicator is nearly there. If its value continues to rise and the historical pattern holds this time as well, then Bitcoin may observe a bottom soon.

At the time of writing, Bitcoin’s price floats around $21k, down 30% in the last seven days. Over the past month, the crypto has lost 30% in value.

The below chart shows the trend in the price of the coin over the last five days. 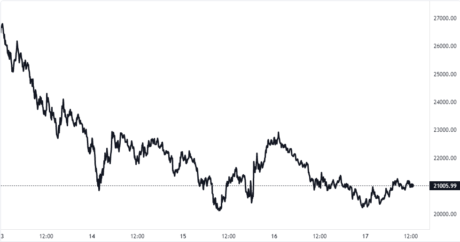 Since the crash a few days ago, Bitcoin has been mostly consolidating around the $21k mark. Currently, it’s unclear whether the decline is over, or if more is coming.

If the LTH share of the realized cap is anything to go by, then BTC may first seen a bit more decline before the bottom is finally in.

The Internal Revenue Service (IRS) has obtained a “court order authorizing summons for records relating to U.S. taxpayers who failed...

Sources have disclosed that the digital currency mining operation, Bitdeer Technologies, has purchased a high-security storage and display facility in...

One of the pressures in the crypto market is regulation. Many countries’ regulators are consistent in supporting the control and...

Throw your Bored Apes in the trash

It’s time to move on from the Bored Ape Yacht Club. They’re bad for nonfungible tokens (NFTs). They give critics...