Commodities and Central Banks in Focus

More from Barkin: Uncertain how much Fed will have lower demand to reach inflation goal

The Australian Dollar made an 18-month low in January, eclipsing the November 2020 nadir of 0.6991 by a small margin. The move was rejected into February as the commodity complex began to march higher prior to the Russian invasion of Ukraine. Short term rate disparity with the US is being overwhelmed for now, but that could change.

Commodities Add to the Bottom Line

Commodity prices have been working in favour of AUD/USD prior to the Russian invasion of Ukraine. The brutal reality of the conflict led to severe sanctions against Russia by a large swath of the global community. The restrictions have seen dramatic moves higher in the prices of energy, industrial metals, precious metals and soft commodities. This is everything that Australia exports.

At the same time, Russia accounts for around a measly 0.2% of Australian exports. Russia is essentially a direct competitor of Australia in commodities and their absence from global markets will continue to have ramifications. The terms of trade will continue to work in favour of the Australian economy unless a resolution to war can be found.

Rate Spreads Can Only Do So Much For AUD

The robust domestic economy has seen headline consumer price index move above the RBA’s targeted 2-3% inflation range, printing at 3.5% year-on-year to the end of 2021. The RBA’s preferred measure of trimmed mean came in at 2.6% for the same period. The RBA has said that they see inflation moving higher into the end of 2022 and then easing in 2023.

Some pundits have argued that this bout of inflation is ‘cost-push’ inflation rather than ‘demand-pull’. The US Federal Reserve called such a notion ‘transitory’. There are cracks in this thesis from two angles.

If the increase in costs for companies and producers were temporary, then the cost-push argument could hold. However, the elevated increase in costs at the factory gate have remained higher for longer than anticipated. The weak 2020 fourth quarter producer price index (PPI) number is about to drop from the annual reading. Given the environment we are in, the next print is highly likely to see a large upside outcome. This leaves companies with the option of margin compression or passing on the price increase.

So far, the buck has been passed on and any profit-motivated CEO is likely to pursue this path. Consumers are already seeing the price increases and from anecdotal evidence, they have accelerated. Employers have already started adjusting wages to the new inflation levels. High price expectations are becoming entrenched, and this is a problem when it comes to inflation targeting.

The second aspect is the policy itself. The RBA cash rate at 0.10% is loose. Household balance sheets are as healthy as ever. This leads to demand-pull inflation. If policy was somewhere near neutral (R*), whatever that may be, then demand-pull inflation could be put aside. It is not, consumers are able to afford higher prices in the near term because of loose policy. In many cases, new demand has caused large price rises.

It’s possible that the RBA could look at the policy error facing the Federal Reserve and act sooner than previously signalled. They have form in saying one thing and doing another not long after. The first quarter inflation data is due April 27th. The RBA meeting is on Tuesday May 3rd.

The market is currently looking at June for rates lift off. A strong CPI outcome could prompt a move on them sooner than the market is expecting.

With all of that in mind, the RBA is not likely to overtake the Fed on the pace of rate rises. Yield differentials at the short end are likely to favour USD, but the back-end favours AUD with the 10-year yield spread now over 40 basis points. However, if the RBA does change course, it may see AUD appreciation in the short run.

The outcome for the Aussie over the second quarter appears dependent on two key variables. The Ukraine war impact on commodity prices and the policy adjustments from the RBA and the Fed.

If the war is prolonged, then commodity prices seem likely to stay at elevated levels for some time. It’s possible that worst case scenarios have already been priced into the commodity arena, but the consequences of sanctions on Russia are yet to be fully understood.

The RBA might kick off their rate hike cycle sooner than anticipated, but the Fed is set on a more aggressive path to fight inflation. The latter’s action has already seen the back end of the yield curve move to much higher rates. However, rising RBA rate hike bets have helped AUD, as Australian bonds have outpaced US bonds to higher rates of return. 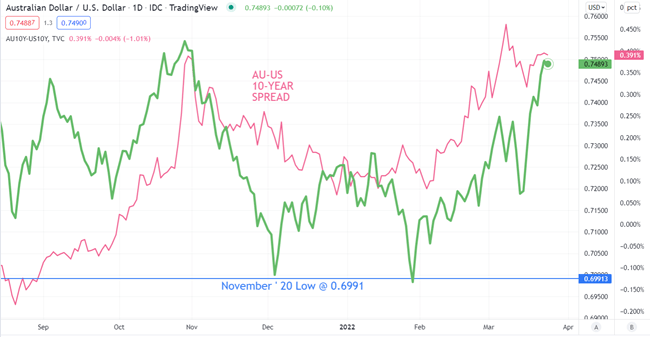 © Reuters. Banknotes of Chinese yuan and Russian rouble are seen amid flags of China and Russia in this illustration...

More from Barkin: Uncertain how much Fed will have lower demand to reach inflation goal

Significant worsening of economic outlook is cause for concern

© Reuters. By Ambar Warrick  Investing.com-- Most Asian currencies fell on Thursday, taking little support from a recent dip in the...