The Australian Dollar was little moved after the March unemployment rate came in at 4.0% against the 3.9% forecast and 4.0% previously. The overall change in employment for the month was 18k instead of 30k anticipated.

Today’s date is ahead of the all-important first quarter CPI number on April 27th. It could prompt the RBA into rates lift-off in the middle of a federal election campaign at their May meeting.

The RBA have form in doing so, they raised rates in the middle of an election campaign in November 2007 as inflation was ticking up.

The underlying fundamentals remain strong for the Australian economy with trade data remaining positive, although missing expectations earlier this month.

The figures revealed a domestic economy in full throttle, with exports steady, but the value of imports surging on the back of local spending.

The boost in spot commodity prices, as a result of the Ukraine war, is yet to hit the national balance sheet, as shown in chart below from the RBA. The prices received by exporters is likely to increase over the coming quarters.

The immediate outlook for AUD/USD is fraught with uncertainty. A long weekend beckons, and with it, illiquid trading conditions.

This Friday will see most of Europe and North America away from their desks. Then Monday morning will see Australia on holiday for the Asian open to start the week. FX is described by some pundits as 98% boredom and 2% sheer terror. Without volume, thin markets can make for the later.

Yesterdays close developed a bullish Spinning Top Candlestick formation. This might signal a reversal of the current sell-off.

Before the recent spike up in AUD/USD, a Golden Cross was observed when the 21-day simple moving average (SMA)crossed above the 260-day SMA.

The opposite of a Golden Cross is a Death Cross which could be a bearish signal. The 10-day SMA is close to crossing below the 21-day SMA.

Observing the different tenures of these SMAs, an interpretation of these conflicting “crosses” might be that short term momentum may see bearishness, but that underlying medium and long-term momentum remains bullish for now. 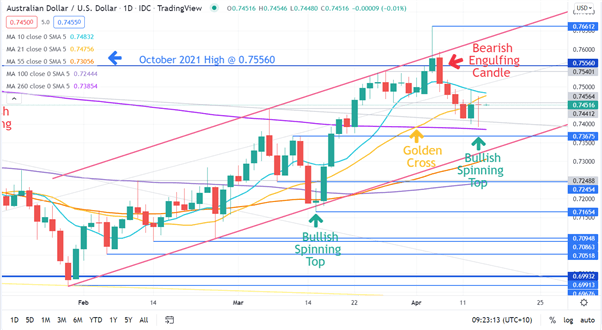