While the move beat most forecasts, a number of market analysts had anticipated the 50 basis points (bps) rise.

Like many other G-20 central banks, the RBNZ is looking to control rampaging inflation in the aftermath of extremely loose fiscal and monetary policy.

The US Federal Reserve has turned very hawkish in the last fortnight. The consequences of keeping policy too loose for too long have become apparent to them.

Inflation data released overnight saw the headline CPI for the month of March hit expectations at 1.2%. Revisions saw the annual number to the end of March print slightly higher than anticipated at 8.5%.

Year-on-year New Zealand CPI is running at 5.9% to the end of the fourth quarter 2021, the highest in 30 years. With local GDP running at 3.1%, stagflation is a very real risk to the broader economy.

Australia and New Zealand are the only 2 countries in the OECD to provide their central banks with quarterly inflation data, rather than monthly. 2022 first quarter CPI will be released April 21st.

Of concern to the RBNZ, the monthly food price index was released yesterday and printed at 0.7% for the month of March. This gives an annual read of 7.4% for food inflation at the retail level. This data may have been the impetus for the 50bp hike instead of the more commonplace 25bp change.

On the positive side of the ledger, elevated global dairy prices have continued to underpin the New Zealand Dollar. Industry estimates are forecasting a record NZD 20.9 billion revenue from dairy exports for 2022, accounting for just under 10% of the nations’ GDP.

An update on the Global Dairy Trade (GDT) Price Index is due next Wednesday April 20th.

If the price remains at the current level, or higher on the close today, the 55-day simple moving average (SMA) will cross above the 100-day SMA. This is known as a Golden Crossand may signal bullish momentum is evolving. 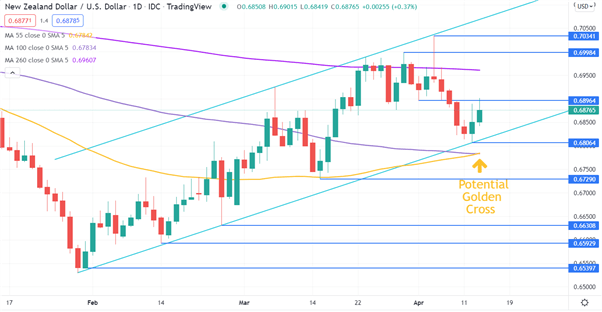