EUR/USD Braces for a Hawkish Disappointment Ahead of the ECB

Tomorrow the ECB is due to address the public on its latest monetary policy decisions but we are unlikely to see much deviation from what was communicated at the March meeting – APP to be wound down around Q3 with a rate hike to follow sometime after, keeping options available and remaining data dependent.

Challenges to the euro have stacked up recently. Apart from the EU’s proximity to the war in Ukraine and its reliance on sanctioned Russian energy (gas), uncertainty around the French general elections have only added to the regions concerns. However, after the weekends first round results, confirmation of Macron taking the lead resulted in a very brief relief rally for the euro ahead of the next stage of the election process.

Yesterday, the German and EU ZEW economic sentiment surveys revealed further pessimism regarding economic conditions within the eurozone in the next 6 months despite the German figure beating expectations (-41 actual vs -48 expected). In addition, the German Economic Institute cut its 2022 Germany growth forecast from 4.8% to 2.7%, reiterating the economic challenges faced by the EU’s largest economy.

As the above-mentioned economic headwinds build, implied market probabilities of rate hikes in 2022 have risen, alongside German bond yields. Markets now expect 70 basis points worth of hikes before year end while the 10-year bund yield is well above zero, around 0.82%, very much on an upward trajectory. 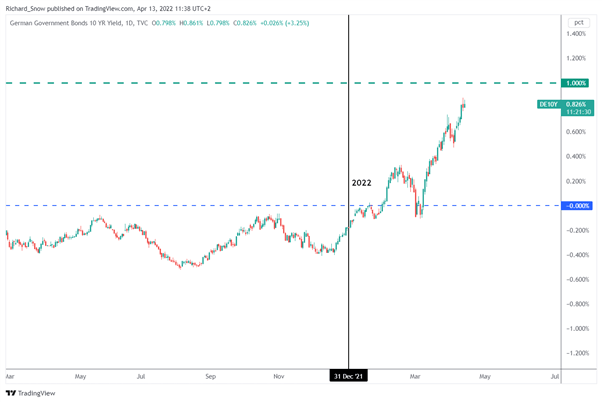 As such, a reiteration of ECB sequencing i.e. waiting for APP to end before raising rates; and further dovish sentiment, could very likely result in further euro depreciation.

EUR/USD continues to drop as yesterday marked the 9th straight day of losses. Even Macron’s lead at the polls was not enough to see the pair end in the green. Price action now trades around the recent low of 1.0805 which remains crucial for the prospect of further selling. A break below 1.0805 and the long term trend line from 2017 sees 1.0635 as the next level of support.

However, a hawkish tone from the ECB could pave the way for a relief rally in the pair, whereby 1.0945 remains as the most significant level of resistance ahead of the psychological level of 1.1000. 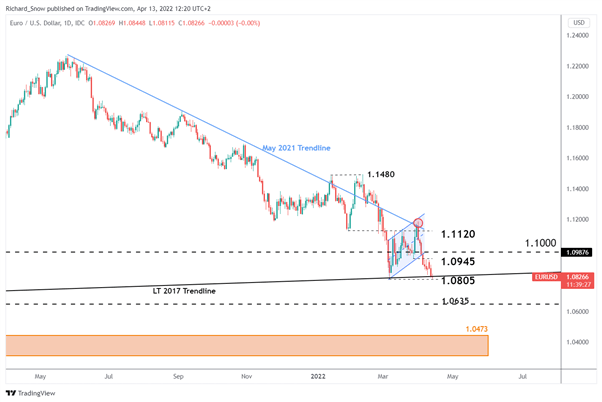