Update: MULN stock ended Tuesday at $2.47 per share, down 7.14% on the day. Wall Street kick-started the day with gains as US March inflation figures were less concerning than anticipated by the White House. The Consumer Price Index soared to 8.5% YoY, higher than the 8.4% expected and above the previous 7.9%. Likewise, the core reading printed at 6.5% YoY, slightly above the February reading at 6.4%. However, US indexes were unable to hold on to gains and closed the day with modest losses. The Dow Jones Industrial Average lost 87 points, while the S&P ended 14 points lower. The Nasdaq Composite shed 0.30%.

Additionally, government bond yields soared ahead of the opening,  but eased after the release of US inflation data, stabilizing around their opening levels. The yield on the 10-year Treasury note currently stands at around 2.72%,  after peaking at 2.836%. On the Russian-Ukraine crisis, news were discouraging. Russian President Vladimir Putin said that talks with Ukraine are in a dead-end, claiming that the latter has deviated from the agreements achieved at talks in Istanbul, Turkey.

Previous update: MULN stock keeps going through its rollercoaster ride inside a wide trading range on Tuesday. After rallying almost 6% on Monday, Mullen Automotive shares are down nearly 5% after the first hour of regular trading on Tuesday. Despite a relief rally on most equity indices after the US Consumer Price Index numbers came out missing the worse estimations, the electric-vehicle meme stock is going the opposite way in today’s trading, down to $2.54 at the time of updating this post (14.43 GMT). Mullen Automotive is a penny stock and has been one of the favourite stocks of the retail-trading crowd in the past few weeks as they look for a short-squeeze, so expect volatility to continue.

Prior Update: MULN stock opens with its (by now) customary volatility on Tuesday. MULN shares opened at $2.68 before moving higher to trade up to $2.71 within the first two minutes of trading. MULN stock is searching for some form of stability and direction after the recent sell-off following Hindenburg Research’s negative report. Some investors still hold out hope while others may be looking for a short squeeze in this small-cap name where the short interest does appear to be increasing. While the US CPI report just out does not directly impact MULN stock it does affect equity risk appetites. These have been solely focused on defensive names in advance of the upcoming Fed rate decision. Tuesday’s CPI number was high but investors had expected as much and equities are currently on a relief rally. This should help the risker side of the market and may benefit MULN stock indirectly. At the time of writing MULN stock is now at $2.67 up 0.38%

MULN stock recovered quite a lot of ground on Monday as it closed up nearly 6% at $2.66. MULN shares had been under extreme pressure following the release of a report by noted short-seller Hindenburg Research last week. Mullen Automotive stock cratered but recovered some ground on Monday, here’s why.

A Youtube interview circulating on Monday attempted to clarify some of the claims made in the Hindenburg report, especially those relating to the performance of its battery technology and potential range. To recap from the Hindenburg report: “We never would have said that. We never did say it and certainly wouldn’t have said it based on the results of testing that battery,” according to the CEO who carried out the battery test, quoted by Hindenburg.

Regardless, it was enough to send MULN stock higher and this move has carried on on Tuesday with another 2% added in the premarket. We should point out that the latest reports show Mullen Automotive has a large and growing short interest, reportedly at over 20%. There is the potential for a short squeeze which may also be behind some of the recent MULN stock recoveries.

$2.06 and $4.21 have been the key levels for MULN stock. $2.06 is the breakout level and where the recent spike to $4.21 began. Below there Mullen Automotive shares would be going back to sub $1. Breaking above $4.21 will see more momentum traders enter and the move could accelerate.

There is much more uncertainty surrounding this stock than is usual. It is highly volatile and the Hindenburg report carries serious questions that need to be clarified. So please manage your risk carefully. Speaking personally, I would not be tempted to enter either way. While the Hindenburg report may make some interesting points and tempt some to go short the volatility and ease with which one can get stopped out are too high here. MULN stock has a growing short float and has traded considerably higher in the past. This is a penny stock, a small-cap company so be warned. 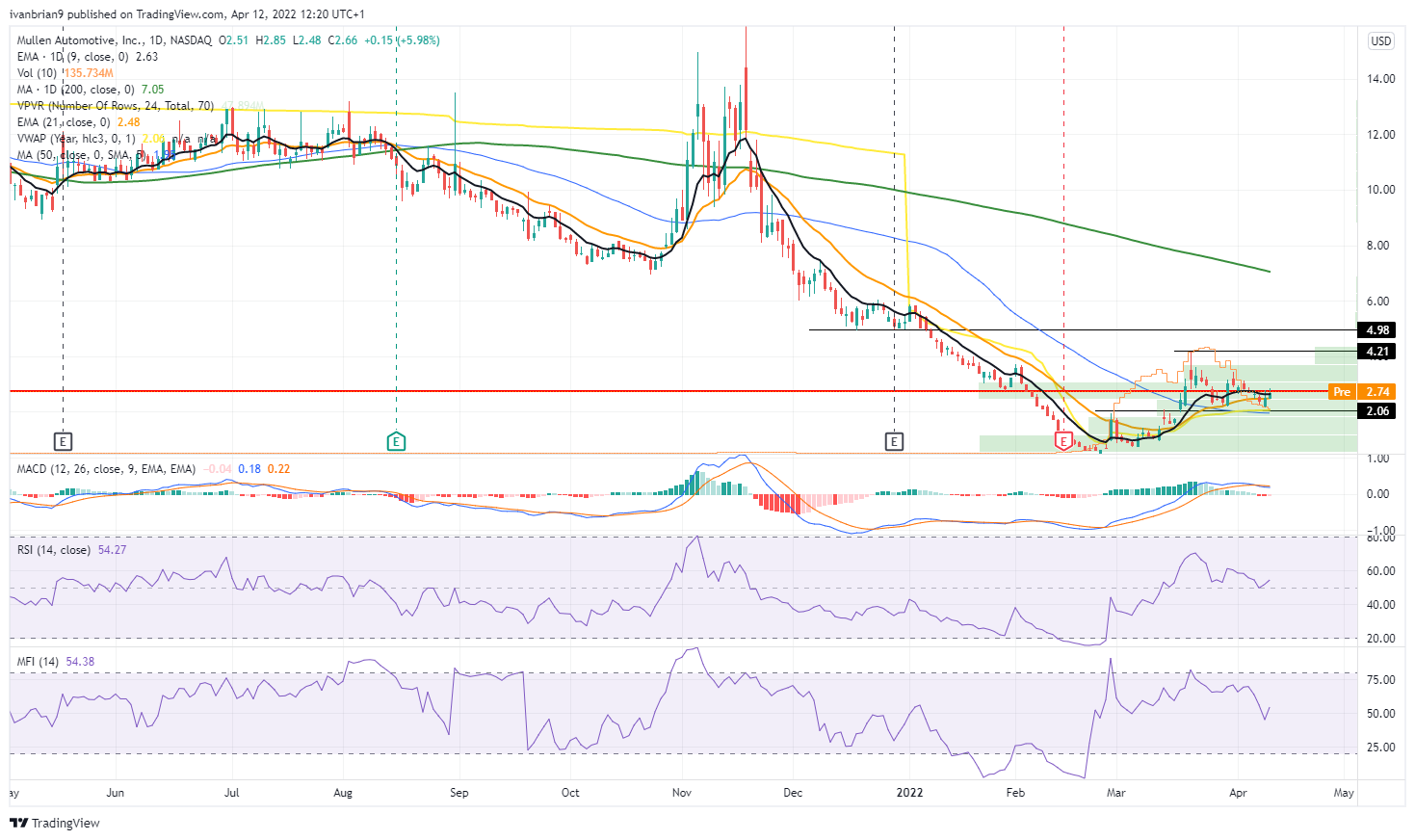